Marouane Fellaini has been handed a place in WhoScored’s European ‘Team of the Month’ for September following his recent superb form at Manchester United.

The Belgian has been an indispensable figure ever since he replaced Paul Pogba against FC Basel earlier this month and scored Man United’s first goal in this season’s Champions League.

Alongside the indomitable Nemanja Matic, he continued to impress in wins over Everton, Southampton and Crystal Palace, claiming two goals against the latter.

And the midfielder has been duly awarded with a place alongside Lionel Messi and Kevin de Bruyne in midfield in WhoScored’s ‘Team of the Month’ for last month. 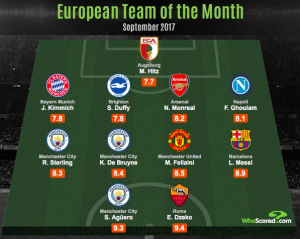 Perhaps Messi, having been included in the same side as Fellaini, can finally rest easy and look back on a worthwhile career.

For Fellaini, however, such things don’t matter. You sense the Belgian has little regard for individual awards and, more broadly, what others think. Never once did it look as if he was bothered by the resentment he received from fans. And the reverse is also true. He doesn’t ever seem interested in garnering adulation.

And this is because the 29-year-old, regardless of circumstance, has been here to do the same thing each time: commit everything to the cause.