Liverpool vs Manchester United: Potential XI with three at the back

Manchester United’s poor form at home to lesser sides last season meant that little attention was given to their impotency away from home against the top five.

They didn’t pick up a single win, losing at Chelsea, Tottenham Hotspur and Arsenal, alongside only managing one goal on their travels.

Needless to say, while Man United appear to have eradicated their troubles at home, doubt remains over whether they can swipe aside those nearer to them in the table, and the trip to Anfield presents Jose Mourinho with the perfect chance to do exactly that.

Here is a potential XI for the game against Jurgen Klopp’s side on October 14 with Jose Mourinho playing three at the back. 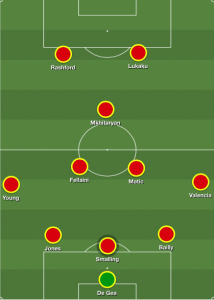 An encounter that ebbs and flows from end to end will favour Liverpool, especially at home. This is a side, after all, that beats teams less through skill and more by simply outpacing them.

This is why Mourinho may feel tempted to make life awkward for Liverpool by moving Ashley Young and Antonio Valencia high up the pitch to accommodate the midfield, keeping Liverpool’s full-backs in their half, and opting for a more zonal defensive approach to keep Sadio Mane and Philipe Coutinho contained, with Chris Smalling serving as the anchor at the back.

Make no mistake: the footballing purist would love to see both sets of full-backs tearing up the pitch whilst wingers cut inside and midfielders bomb forward from deep, creating a spectacle of unyielding, frenetic drama – Klopp going mad, Mourinho shushing the crowd, Fellaini killing someone. All of that.

But this, you sense, would ultimately play into Liverpool’s hands. Mourinho made his side work on this system over the summer for a reason: to control, frustrate and eventually dominate high pressure encounters.