Marcus Rashford, Jesse Lingard and Chris Smalling have all been pictured working hard in training for the England national side at Saint George’s Park.

Phil Jones was also selected for upcoming internationals against Slovenia and Lithuania but pulled out with a persisting ankle problem that kept him out of the 4-1 win over CSKA Moscow.

Rashford claimed a goal and an assist against Malta and Slovakia last time out and supporters will hope to see him handed further opportunities by Gareth Southgate.

And he was seen putting in the hard yards along with Lingard and Smalling ahead of Thursday’s clash with Slovenia at Wembley. 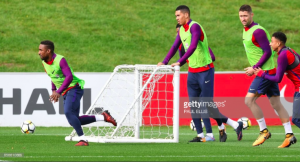 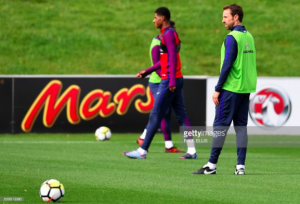 Focus will naturally revolve around Rashford over the next couple of weeks. I would personally rather see him wrapped in cotton wool ahead of the trip to Anfield, but Southgate simply can’t just overlook somebody with five goals and four assists to their name from seven starts this season. He will play an important role in these internationals.

But perhaps this international break ought to really be about Lingard and Smalling – two players who haven’t really managed to make an impression on Mourinho’s starting XI so far this season, making seven starts collectively.

The international break, for most, is something of a hindrance, but for the aforementioned pair it could be exactly what they need to demonstrate their worth to Mourinho.