Last year’s 0-0 draw at Anfield was largely dominated by a furiously paced midfield battle made memorable by a sensational display from Ander Herrera.

Manchester United were disciplined and tenacious all evening but, as was often the case away from home against the top five, lacked the stimulus to get players higher up the pitch on the ball.

And Jose Mourinho will be desperate to see the likes of Marcus Rashford, Henrikh Mkhitaryan and Romelu Lukaku taking on Liverpool’s shaky back four as much as possible.

With that in mind, here is a potential XI for the trip to Anfield including Nemanja Matic and Marouane Fellaini in the middle. 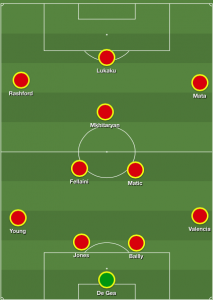 On paper, pitting the aforementioned pair against what is likely to be a midfield comprising of hard-runners like Emre Can, Jordan Henderson and Georginio Wijnaldum may seem naive.

But United have one crucial advantage on their side that wasn’t there last year: confidence.

So much of the game is played in the mind, and the sight of Mourinho using a midfield three – using Herrera once again – would be synonymous with admitting that Liverpool’s style is in some way threatening. Jurgen Klopp’s men would capitalise on that.

Instead, remaining loyal to the midfield pivot, meaning Mkhitaryan can feature in the No.10 role, would give United greater diversity and an improved structure higher up the pitch. And that, rather than shutting Liverpool down, should be the emphasis on October 14.