Liverpool vs Manchester United: Potential XI with three in midfield

Jose Mourinho has so far swiped away teams with a two-man pivot in midfield this season but he may feel like a different strategy is needed for the trip to Anfield next Saturday.

Jurgen Klopp’s side have been predictably unpredictable this season, occasionally showing their brilliance going forward whilst also struggling to defend properly or put games to bed.

Indeed, Manchester United enter the game as strong favourites, but Mourinho ought to take notice of what happened when Arsene Wenger decided to use Granit Xhaka and Aaron Ramsey at Anfield earlier this season.

With that in mind, here is a potential XI for the trip to Merseyside with Nemanja Matic, Marouane Fellaini and Ander Herrera forming a midfield three. 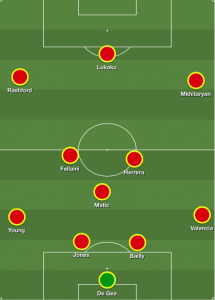 The last thing Mourinho wants to do against Liverpool is lose control of the game. If Emre Can and Philipe Coutinho start to receive the ball in promising areas and the home crowd sense blood, Man United will undoubtedly struggle.

This is why Herrera’s influence is so important. The Spaniard’s tenacity and running power, just like last season, will keep the midfield battle competitive and stop Liverpool from moving the ball to the likes of Sadio Mane and Mohamed Salah on such a regular basis.

Combine that with the steely assurance of Matic, alongside the threat posed by Fellaini going forward, and United could keep Anfield suitably quiet.