Liverpool and Manchester United head into the clash at Anfield with two notably different defensive records.

Jose Mourinho‘s men have only conceded two Premier League goals all season, while Liverpool are conceding almost two goals a game on average.

Needless to say, the Portuguese simply has to place emphasis on putting pressure on the likes of Joel Matip and Dejan Lovren from minute one.

And with that in mind, here is a potential XI for the game against Jurgen Klopp’s men with Romelu Lukaku and Anthony Martial up front. 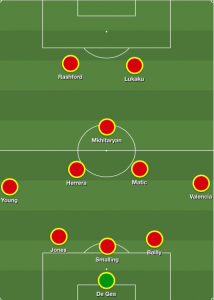 Man United fans received a massive boost after Lukaku, who had been nursing an ankle injury, came on to score for Belgium against Cyprus – a powerful affirmation of the 24-year-old being back to full fitness and, of course, full potency.

He has bullied defenders relentlessly this season and Mourinho will want to pit his raw strength and power against Liverpool’s shaky back line as much as possible.

And the presence of Martial alongside him could bring Liverpool to breaking point. Nobody has been more clinical than the Frenchman so far this season and, following a lengthy period of rest over the international break, he will be chomping at the bit to inflict damage at Anfield.