When the two teams were announced ahead of Manchester United’s visit to Anfield this time last year, attention focused more on who wasn’t in the line-up rather than who was.

Supporters were incredulous at the sight of seeing Henrikh Mkhitaryan completely left out of the match-day squad for the seventh time in a row despite him seemingly recovering from a hamstring strain he had sustained a month ago.

This time around, however, he could be the key to unlocking what promises to be a furiously paced, frenetic encounter with Liverpool on Saturday.

And with that in mind, here is a potential XI for the clash with Jurgen Klopp’s men. 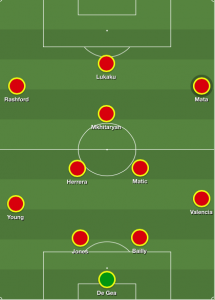 Make no mistake: last year’s stalemate needed Mkhitaryan’s wizardry on the ball. Under Klopp, Liverpool create games that whizz along at a furious velocity but, as a result, contain very little direction, kind of like a rocket-ship without a compass.

This tempo suits Liverpool, especially with the Anfield crowd behind them. And Mkhitaryan, with Juan Mata next to him, will be charged with the task of operating in what will at times feel like a blender and to come out with an apple.

Supporters will just hope the Armenian can keep his cool and move the ball along with precision on Saturday, unlocking spaces for the likes of Marcus Rashford and Romelu Lukaku to exploit.