Home » Benfica vs Manchester United: Potential XI with Juan Mata at No.10

Benfica vs Manchester United: Potential XI with Juan Mata at No.10

Benfica have lost their first two Champions League games this season and will go for Manchester United’s jugular on Wednesday as a result.

And Jose Mourinho, in response, may feel like adopting a three at the back system serves as the best way of maintaining control of proceedings as Benfica look to hassle the visitors early on.

Moreover, he will want to hand some key players a rest with the clash in Lisbon coming in between trips to Liverpool and Huddersfield.

With that in mind, here is a potential XI with Juan Mata replacing Henrikh Mkhitaryan at No.10. 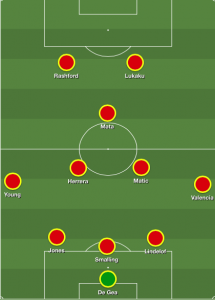 The Armenian went to Anfield off the back of five starts throughout September and a trip to Kazakhstan with his national side last week, and Mourinho could opt to use the comparatively fresh Mata, who didn’t feature for Spain over the international break or play against Liverpool.

He has only featured once at No.10 this season – against Burton Albion – and deserves a chance to act as a springboard from which to release Marcus Rashford and Romelu Lukaku in behind Benfica’s back four.

Mourinho saw his side receive plenty of joy by pressing CSKA Moscow’s centre backs high up the pitch, bringing the likes of Ashley Young into the game, and Mata will need to spearhead the attack on Luisao and Jardel on Wednesday.