Manchester United can come away from their trip to Lisbon full of confidence following another professional, disciplined display.

Jose Mourinho‘s men, whilst uninspiring going forward for large parts, never looked like scoring and eventually turned the screw on the Portuguese champions to claim a deserved win.

But there will be lingering concerns about the state of United’s midfield, which often failed to generate much momentum or fluidity – especially in the first half.

And with that in mind, here is a potential XI for the visit to Huddersfield with Juan Mata featuring in a midfield three alongside Nemanja Matic and Ander Herrera. 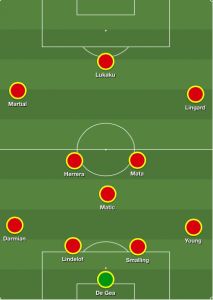 Put simply, a midfield duo of Matic and Herrera is just not dynamic enough to give players further up the pitch a chance to inflict damage. This is why Paul Pogba is so missed: the Frenchman makes that gap between midfield and attack feel practically nonexistent at times.

And you can’t help but feel as if Mata’s subtle yet crucial influence on the ball could come in handy against David Wagner’s side. The Spaniard will rarely take the game by the scruff of the neck but few players are more adept at maintaining pressure and threading passes through the lines, providing not just the right pass but indeed a perfectly weighted one as well.

United miss that natural quality on the ball in midfield and Mata, who impressed in Lisbon, would provide exactly that in Yorkshire this weekend.