Manchester United simply need to come up with a response at Swansea City following their worst performance of the season against Huddersfield Town last weekend.

Victor Lindelof‘s horror show, along with a general lack of urgency and precision, served as the architect of Man United’s downfall against David Wagner’s men.

But the bottom line is that the shortcomings seen over the weekend were magnified by a complete lack of potency going forward, with the visitors only managing three shots on target.

And with that in mind, here is a potential XI for the visit to the Liberty Stadium with Marcus Rashford – United’s biggest threat in front of goal at this moment in time – starting up front. 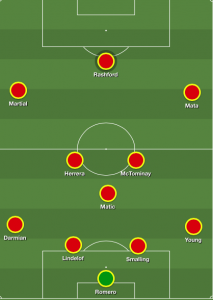 The landscape would look a whole lot bleaker for United if it wasn’t for the teenager’s interventions against both Benfica and Huddersfield.

Jose Mourinho‘s men have failed to reproduce the same effervescence in front of goal since the international break and what they need on Tuesday, above anything, is an attacking display led by the perennially ebullient youngster, with Juan Mata and Anthony Martial stretching Swansea out wide, along with Romelu Lukaku – who needs a goal – coming on to take advantage of a few tired legs late on.

Rashford spearheaded United’s last League Cup win through little more than his sheer precision in front of goal and Mourinho will be praying he does the same in South Wales.