Manchester United have a superb chance to secure a place in the Champions League knockout stages against Benfica on Tuesday night.

Jose Mourinho‘s men, with nine points from their first three games, only need a draw to progress but Old Trafford will want to see their side put on an attacking performance.

And with that in mind, here is a potential XI featuring Jesse Lingard at No.10 and Anthony Martial starting out wide for the clash with the Portuguese champions. 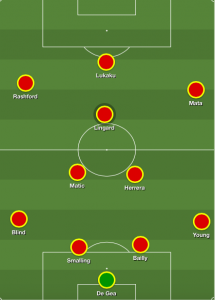 Ever since claiming five assists in his first three games, Henrikh Mkhitaryan has dramatically struggled to pose a constant threat at No.10 to the detriment of others.

No.10 is, of course, the axis of United’s attacking line-up. Their task, above anything, is to move the ball around with precision and forward momentum, bringing the likes of Romelu Lukaku into the game and creating space for players out wide.

And the Armenian simply hasn’t done this in recent times: he looks unsure of himself and often finds himself muscled out of possession. That intuitive urgency just isn’t there.

Lingard, on the other hand, has been a live wire in his last two appearances, scoring a brace against Swansea City and almost providing an assist for Romelu Lukaku against Tottenham Hotspur. He looks nimble, unpredictable, driven – perhaps determined to take advantage of his teammate’s recent lapse – and could cause damage with Anthony Martial, the hero from the weekend, on the left hand side.