Jose Mourinho has been strapped for options at times over the last month, especially in midfield, and it has culminated in Manchester United falling eight points behind Manchester City in the Premier League table.

Paul Pogba, Marouane Fellaini, Michael Carrick have all been sidelined throughout October, while Marcos Rojo still hasn’t played yet.

And with that in mind, here is a potential XI for United’s next Premier League clash with Newcastle United. 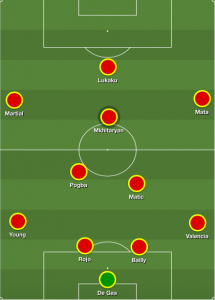 For all the issues surrounding personnel, team shape and attacking clout over the last few weeks, United’s most pronounced problem has revolved around a lack of characters in the dressing room.

The return of Pogba and Rojo, therefore, could prove to be salutary for Mourinho’s side. Any midfield in world would be improved by the Frenchman’s addition and no other area needs to change more than the side’s nucleus – its very core. And while Nemanja Matic continues to impose himself at the base, Pogba will bring some desperately needed vitality against Rafa Benitez’s men.

Sitting behind him will hopefully be another immense character in the form of Rojo. The Argentine enjoyed his finest campaign in a United shirt last season, leading the line with aggression and intent, and supporters will just hope his transition back into playing games is a smooth one.