Romelu Lukaku’s brace for Belgium over the international break took him level with the all-time goalscoring record and proved emphatically that his recent malaise for Manchester United is less of a personal problem and more of a structural one.

Jose Mourinho‘s midfield options over October were scarce to say the least and it meant the attacking build-up on display was largely predictable and even mundane at times.

The return of Paul Pogba, therefore, for the clash with Newcastle United comes at a perfect time for a man desperately suffering from a recent lack of momentum behind him.

And with that in mind, here is a potential XI for the clash with Rafa Benitez’s men including Pogba and Lukaku. 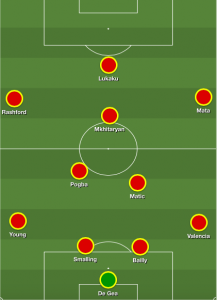 The Frenchman’s return doesn’t just mean that Lukaku will benefit from more pin-point balls over the top – an avenue of attack Mourinho would have had in mind when deliberating on how to build on last season. This is a secondary concern, a pleasant epiphenomenal effect of having such a versatile talent on the ball.

Pogba’s main role in this side instead revolves around serving as a conduit between midfield and attack, moving play through the lines quickly to give Henrikh Mkhitaryan – another player desperately suffering from the 24-year-old’s absence – more time and space on the ball, which in turn gives United’s play in the final third greater dynamism and fluidity.

And therein lies the key to unlocking Lukaku’s brilliance: building movements forward at speed and creating just enough space for the Belgian to punish opponents.

He doesn’t need a confidence boost; he just needs somebody who can keep others occupied further behind him, and that is what Pogba will bring in abundance.