For the first time in over a month, Jose Mourinho will not be forced to call upon the duo of Nemanja Matic and Ander Herrera as his only midfield combination.

The Portuguese has struggled to engender much momentum in the middle of the pitch in the absence of Paul Pogba, Michael Carrick and Marouane Fellaini.

And while the Frenchman may not be risked against Rafa Benitez’s side, Fellaini will be raring to go after making his comeback from knee ligament damage against Chelsea and sitting out of the international break.

With that in mind, here is a potential XI for Saturday’s clash including Fellaini and Matic. 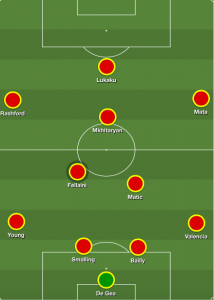 There is only so much you can do with a midfield comprising of two defensive midfielders. Mourinho certainly would have never considered using Herrera and Matic as a pair if everybody else was fit.

And supporters will be delighted to see Fellaini – an indispensable figure for Mourinho throughout September – add some desperately needed impetus from the middle, brushing opponents off the ball and inexorably carrying momentum forward, rather than sideways.

His disruptive presence in midfield will hopefully precipitate further room for Henrikh Mkhitaryan, who has dramatically struggled in recent times, to inflict damage in the final third.