FC Basel vs Manchester United: Potential XI with Henrikh Mkhitaryan at No.10

Henrikh Mkhitaryan had to watch on from the stands as Manchester United, rejuvenated by the return of Paul Pogba and Zlatan Ibrahimovic, returned to their emphatic best over the weekend against Newcastle United.

The Armenian had been left out for ‘tactical reasons’, according to Jose Mourinho, but his absence from the squad was no surprise following a stream of anonymous displays at No.10 – the worst of which coming at Stamford Bridge a fortnight ago.

But with Pogba’s vitality and forward impetus back in the side, Mourinho may feel as if Mkhitaryan, whose confidence has plummeted once again, could benefit from receiving a run out on Wednesday against FC Basel.

Here is potential XI for that clash with the 28-year-old returning to feature at No.10 in Switzerland. 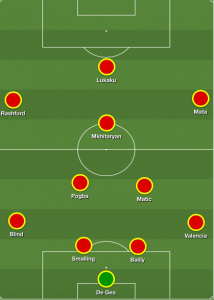 Mkhitaryan, like all No.10s, needs the right conditions in order to shine and the recent lack of forward impetus from behind has badly affected him.

But United were a completely different outfit on Saturday. Pogba has the ability to quite literally drag his teammates forward, creating space almost at will, and it precipitated a galvanising display where everybody was receiving touches on the ball, growing in confidence as the minutes passed.

And with Basel needing to win on Wednesday, you sense that Mkhitaryan’s depleted confidence would benefit from both Pogba’s presence and the space left in behind by the Swiss champions.