Paul Pogba has been handed a place in Garth Crooks’ BBC ‘Team of the Week’ following his superb performance during Manchester United’s 4-1 win over Newcastle United on Saturday.

The Frenchman had missed 12 games with a hamstring injury but didn’t take long to resume his place at the heartbeat of Man United’s attacking display.

He provided a superb assist for Anthony Martial to draw Man United level before finishing off a wonderful move early in the second half.

And Crooks, who usually just gets annoyed about Pogba’s hair, has duly included the 24-year-old in his ‘Team of the Week’. 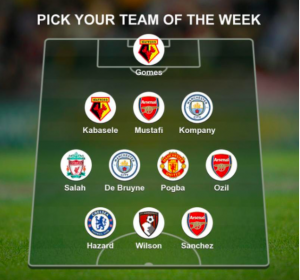 We ought to take a moment to appreciate just how difficult it can be to rediscover your rhythm on a football pitch after two months on the sidelines. Your touch, speed of turn, general urgency and precision can take time to return to normal.

But not for Pogba. It was like the midfielder had never been been away. Perfect passes flew all over the pitch, United came forward with purpose, and there was, towards the end, a hint of swagger about how they imposed themselves on Rafa Benitez’s side.

It was straight back to business for Pogba, and the difference in momentum and thrust was overwhelming.