Matteo Darmian‘s poor discipline led to the home side winning a succession of free-kicks during the latter stages and gaining momentum as a result, while Daley Blind‘s lack of pace and awareness eventually allowed Michael Lang to steal a late winner.

Needless to say, Mourinho will want to see a more commanding, energetic display from his full-backs against a Brighton side that will try and minimise the space between their defence and midfield.

And with that in mind, here is a potential XI for the clash with Chris Hughton’s men on Saturday featuring Antonio Valencia and Ashley Young. 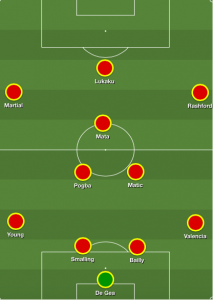 Supporters will be glad to see Mourinho’s strongest full-back combination return to the starting XI after receiving a rest during the week.

But perhaps their presence on the pitch on Saturday will take on a different, perhaps didactic meaning following the horror show in Switzerland.

After all, the notion that Mourinho’s best full-backs are not, by trade, actual full-backs should provide cause for concern, and perhaps incentive to invest in that area over the January transfer window. Two 32-year-old former wingers are simply not the answer at this level.