Following a second half that saw Manchester United capitulate in miserable fashion against FC Basel, supporters will be hoping to witness a more organised, ruthless display when Brighton and Hove Albion visit on Saturday.

Jose Mourinho‘s men could have been out of sight by half time having spurned a litany of chances during the opening stages before losing all momentum as the game went on.

But Old Trafford has started to emerge as something of a fortress in recent, with Man United only conceding once in the Premier League since April, and Mourinho will want to see his side continue to punish teams during the latter stages rather than unravel like they did during the week.

And with that in mind, here is a potential XI including Paul Pogba and Romelu Lukaku for the clash with Brighton. 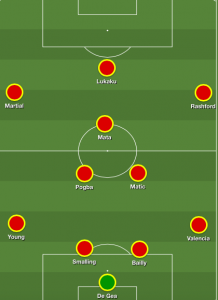 The defining moment of Wednesday’s defeat came in the first ten minutes when Pogba, without even looking, somehow released Lukaku with a perfect ball though the middle.

He managed to muscle into the box but couldn’t really get the ball out of his feet, and his shot was ultimately dealt with. How different everything could have been if United had managed to establish and early foothold.

But as Brighton look to squeeze the space between midfield and defence on Saturday, the combination of Pogba’s supreme vision and Lukaku’s instinct will be United’s best route through which to inflict some early damage.