Home » Watford vs Manchester United: Potential XI with three at the back

Watford vs Manchester United: Potential XI with three at the back

Jose Mourinho praised Romelu Lukaku’s tenacious attitude following the 1-0 win over Brighton and Hove Albion but his lack of presence in the box is fast becoming a concern for Manchester United supporters.

The Belgian did well to quite literally will a corner into existence that Man United then scored from in the second half, yet his only meaningful threat on goal was a header that went straight at Matthew Ryan.

Needless to say, the current absence of a proficient No.10 creating space in behind him may force Mourinho to adopt a different set-up to get the best out of him against Watford.

And with that in mind, here is a potential XI for the visit to Vicarage Road with Marcus Rashford partnering the 24-year-old up front. 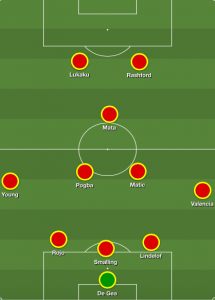 Mourinho realised that his standard 4-2-3-1 system wasn’t working against Newcastle United, with the aforementioned pair unable to effect the game, and he decided to partner them up for the second period.

The result was emphatic. Rashford’s instinctive drive and innovation going forward complimented Lukaku perfectly. Suddenly, he had somebody next to him – another threat to deal with which enabled him, in turn, to pick up ball in dangerous areas and eventually wear Newcastle’s back four down to the point where he literally waltzed past all of them to score.

There is a clear natural chemistry between Lukaku and Rashford. The pair have made note of that since day one. And perhaps Mourinho ought to consider putting it to use.