The spotlight will fall primarily on Mesut Ozil when Manchester United travel to Arsenal on Saturday.

And that will not just be because his name continues to be linked with a move to Old Trafford; a more pressing concern will be the fact that he has entered a spell of superb form that could prove decisive against Jose Mourinho‘s men.

Performances against Tottenham Hotspur and Huddersfield in recent times have shown emphatically that when Ozil is on song, it percolates through to the rest of Wenger’s side, and Mourinho, who knows the playmaker well, ought to make efforts to minimise his influence going forward on Saturday.

And with that in mind, here is a potential XI for the clash at the Emirates with Paul Pogba and Ander Herrera in midfield. 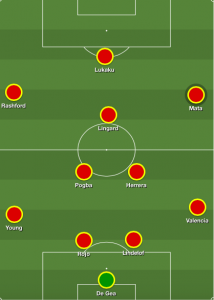 Both Nemanja Matic and Marouane Fellaini are injury doubts for the meeting with Arsenal as it is, which means Mourinho will most likely have to count on Herrera – whose role has been somewhat ambiguous so far this season – to bully the mercurial Ozil out of the game.

Alexandre Lacazette’s absence is a boost. The Frenchman’s capacity to stretch back fours and exploit space in behind renders Ozil a far more dangerous prospect than when Olivier Giroud starts up front, and Herrera will need to keep the midfield battle contained – scrappy, even – to give Pogba the chance to assert himself on proceedings from the start.