Jose Mourinho matched Watford’s back three at Vicarage Road and reaped the benefits.

He let the hosts have the ball, pressed his wing-backs high up the pitch, and waited for a mistake in the middle before unleashing Jesse Lingard, Anthony Martial and Romelu Lukaku up the pitch to devastating effect.

And with Arsenal set to line up in a similar way on Saturday, Mourinho will most likely adopt the same approach, especially with Arsene Wenger’s side bound to dominate the ball.

With that in mind, here is a potential XI for the decisive clash at the Emirates. 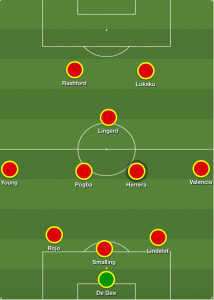 The crux of any successful three-at-the-back system lies with the wing-backs and their ability to press opponents up the pitch, giving midfielders the space they need to move play forward.

United will be sitting ducks if Arsenal pin back Ashley Young and Antonio Valencia. A flat back five and two midfielders versus three provides the perfect platform for Wenger’s men to pass through them at will. Mesut Ozil could inflict serious damage.

This is why the two most important players for United on Saturday are the aforementioned pair. Keeping Sead Kolasinac and Hector Bellerin in check would render Arsenal’s attacking line-up far less dynamic, giving Paul Pogba the chance to dictate proceedings in the middle and United, by extension, the opportunity to finally take control of a big game away from home.