Jose Mourinho will need to do something notably different to unhinge a Manchester City side that haven’t dropped points in the Premier League since August.

Pep Guardiola’s men will naturally enjoy the lion’s share of possession and the 54-year-old’s focus, in response, ought to be on how to stop them wreaking havoc in the final third.

And with that in mind, here is a potential XI for the clash with Man City with Marouane Fellaini coming back into the side alongside Ander Herrera and Nemanja Matic. 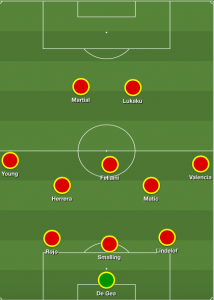 Mourinho noted soon after the 2-1 win over CSKA Moscow that Fellaini, who hasn’t featured since last month’s win over Brighton and Hove Albion, had a “chance” of featuring on the weekend, but you sense that the Belgian would have to be missing at least a couple of limbs to miss this clash.

City have made light work of most midfields this season, with Fernandinho serving as a reliable anchor while the likes of Kevin de Bruyne and David Silva inflict damage, and the Belgian could provide that ‘something different’ needed to unhinge Guardiola’s set-up.

Devising a plan to stop a player with such an idiosyncratic threat is hard to do – even for a manger of Guardiola’s pedigree: physical presence, pure aggression, attacking impetus, a ruthless edge. His unconventional threat could be what finally exposes a black spot in City’s line-up.