Home » Manchester United vs Manchester City: Potential XI with Jesse Lingard at No.10

Manchester United vs Manchester City: Potential XI with Jesse Lingard at No.10

Manchester City may be just the second side in Premier League history to register 43 points from 15 games – a truly stupendous record – but they are far from infallible.

Pep Guardiola fielded a second string side including youngsters Oluwatosin Adarabioyo and Phil Foden for the 2-1 defeat to Shakhtar Donetsk on Wednesday and we ought to take the set-back with a pinch of salt.

And yet, at the same time, Shakhtar’s approach to the game revealed an unmistakeable avenue through which any side, if executed properly, could inflict damage on the Premier League leaders: sharp, precise, rapid counter-attacks through the middle.

With that in mind, here is a potential XI for the clash on Sunday with Jesse Lingard featuring at No.10. 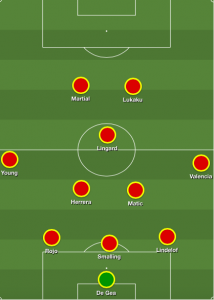 Jose Mourinho will need to get the balance right. The Portuguese’s best displays have always been grounded in a two-pronged approach that features an unshakeable core capable of frustrating the opponent whilst also laying the platform for quick transitions on the break.

And you sense that Lingard, who has provided an emphatic solution to Mourinho’s No.10 problem over the last few games, looks set to act as the vital conduit between United’s defensive wall and their ruthlessness going forward.

Make no mistake: if United can break with the same efficiency seen at the Emirates, they will give this Man City side problems.