A month has elapsed since Zlatan Ibrahimovic returned from injury and his influence up to now has been minimal at best.

The Swede is yet to start under Jose Mourinho this season and has only played 73 minutes in five substitute appearances.

His recovery from a significant knee injury is still clearly far from over and Mourinho has been understandably keen to prevent him from any overexposure.

But you sense that Wednesday’s highly charged League Cup tie at Bristol City could be the right time to throw the 36-year-old back into the fold. 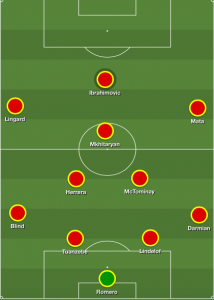 This is nothing short of Bristol’s Cup Final this season and the home side will, as a result, wear themselves down to the bone in front of a ravenous home crowd, leaving little space for United to work the ball around the pitch like they did in the first half against a lethargic West Bromwich Albion.

Mourinho, in turn, may opt for a more direct route of attack, using Zlatan’s physical presence and close control as a springboard for the likes of Juan Mata and Henrikh Mkhitaryan to exploit space created by the Swede in the final third.

Supporters will also hope to see Axel Tuanzebe, who impressed against Swansea City in the previous round, receive another chance at Ashton Gate.