Jose Mourinho insisted he would make wholesale changes to his starting XI against Leicester City following the nightmare at Ashton Gate on Wednesday night.

A number of those players, as the Portuguese alluded to afterwards, didn’t even look like they wanted to be out there and it could serve as a catalyst for some players being moved on next month.

That said, supporters will hope that, in spite of Mourinho’s comments, Scott McTomimay and Luke Shaw are both given further chances to impress further down the line after the pair produced promising displays.

But they won’t be in the picture on Saturday, and nor will most of those who started at Ashton Gate. Here’s a potential XI, with Mourinho returning to full-strength for the trip to Leicester. 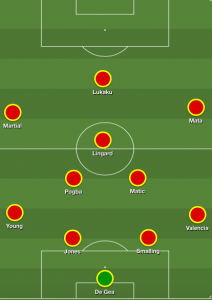 Romelu Lukaku, for what it’s worth, provided more threat than any other forward after coming on, forcing keeper Luke Steele into a number of impressive saves. There seems to be a newly discovered cold determination running through his veins after that display against Manchester City and Mourinho will need him to deliver at the Kingpower.

The 54-year-old didn’t use a No.10 against Bristol and it led to a stultified, dis-jointed attacking display. Jesse Lingard, therefore, looks likely to return alongside the crafty Juan Mata to add some much needed smoothness and bite to United’s play in the final third.