You may feel tempted to assert that every attacking player, save for Juan Mata, deserves to be dropped for the Burnley clash following Saturday’s malaise in front of goal against Leicester City.

Jesse Lingard, Marcus Rashford and Anthony Martial all failed to bring composure or execution to the table at the Kingpower Stadium and it cost Jose Mourinho‘s men.

But the only way to get over the hump and move forward is to throw those exact players in the firing line yet again and expect a better performance.

And they will, no doubt, need their £75m man at the masthead of attack against Sean Dyche’s men. 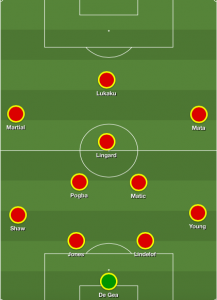 Romeu Lukaku didn’t score on Saturday but should have come off the pitch with three assists to his name after laying on superb chances for Martial, Lingard and Henrikh Mkhitaryan to kill the game off, only for all three to capitulate in front of goal.

On a night where mental resolve and cold execution was in short supply, Lukaku was a precise, determined influence on the ball. There has been a notable change in the 24-year-old’s persona since the derby and Mourinho will be counting on him to continue in the same vein against a solid Burnley side.