Jose Mourinho will need to make some changes to his squad to avoid further stagnancy for the clash with Southampton.

Manchester United’s first half display against Burnley felt flat and it was largely down to a deficit in productive creativity in midfield.

Paul Pogba, for one, could effect the game going forward and throwing him in again on Saturday would lead Man United down a similar road.

And with that in mind, here is a potential XI for the clash with Southampton featuring Scott McTominay in midfield. 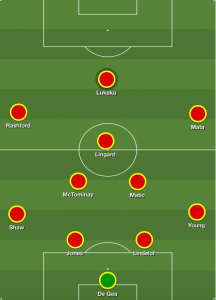 They key to breaking down compact sides at home is patience – an ability to maintain a steady, progressive tempo even when things don’t appear to be going your way.

And with pressure mounting on Mourinho’s men, such a task can be difficult for the biggest players, those like Pogba who are expected to deliver and carry United to victory.

This is why McTominay could serve as the perfect antidote: patience and progression are the two staples of his style on and off the ball, and with the indomitable and reliable Nemanja Matic alongside him we could see a less frenetic midfield display compared to what we saw during long spells of the 2-2 draw on Boxing Day.