For the first time in his Manchester United career, Marcus Rashford‘s performances have started to garner widespread criticism from supporters.

The 20-year-old could have wrapped things up against Bristol City and Leicester with better decision making on the ball, losing possession having been released on goal, and he completely disappeared during the 2-2 draw with Burnley.

Such an agonising malaise has led to many of us forgetting that Rashford, first and full-most, is still young, and has talent in abundance, claiming nine goals and seven assists this season already.

And with that in mind, here is a potential XI for the clash with Southampton on Saturday featuring Rashford up front. 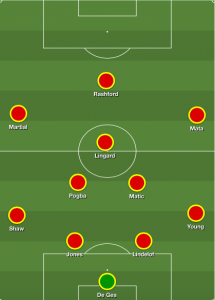 Romelu Lukaku looked stifled and jaded on Boxing Day and could do with a rest having started every Premier League game so far this season, while Anthony Martial – who has recovered from a knee injury – returns to the left hand side.

This lays the platform for Rashford, despite his constant presence on the left hand side under Mourinho, to return to more familiar surroundings, the role that propelled him to stardom in the first place: a chance to burst in behind defenders, flick the ball out wide, chase lost causes, assert himself in the box.

Some supporters need to be reminded of Rashford’s natural brilliance, and a place up top against Southampton seems like the perfect time.