Jose Mourinho will be glad to see the back of what has been a truly hectic – and damaging – festive period during which his side played ten games in 31 days.

Defeat to Manchester City and Bristol City, combined with three successive draws in the Premier League, have put a dampener on Manchester United’s season.

And their injury list has naturally grown in size: Antonio Valencia, Marouane Fellaini, Michael Carrick, Matteo Darmian, Chris Smalling, Anthony Martial, Romelu Lukaku and Zlatan Ibrahimovic have all suffered injuries over the past month, while Ashley Young is suspended until January 20.

With that in mind, here is an alternative line-up for the third round FA Cup clash with Derby County on Friday including Scott McTominay and Axel Tuanzebe. 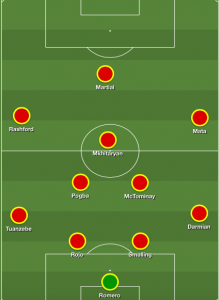 Luke Shaw has helped allay concerns surrounding the left-back position in recent times with three starts – and three solid performances – in the space of six days, but you sense the Englishman, notably prone to injury, deserves a rest. And this paves the way for Tuanzebe, whose last start dates back to November, to make his mark once again.

Nemanja Matic is another player who could also do with a rest. An element of lethargy has crept into his displays in recent times – understandable given he has hardly missed a minute of action over December – and the promising McTominay, who impressed against AFC Bournemouth, deserves an opportunity to further impose himself under Mourinho.