January is now here and the clock is ticking on Henrikh Mkhitaryan’s time at Manchester United.

The Armenian has gone miserably downhill since a superb first three games and his display against Southampton typified exactly why he has been frozen out of Jose Mourinho‘s plans since early November.

And you can only assume that more of the same will ultimately lead to his departure from the club, with Inter Milan and Borussia Dortmund said to be interested in handing him a lifeline.

An opportunity to start at No.10 against Derby County on Friday night could be his last chance to convince his manager, as well as supporters, that he still has something to offer at Old Trafford. 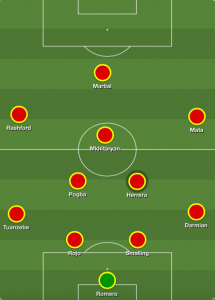 Mkhitaryan has always been a confidence player, his career shaped by a series of peaks and troughs depending on how he feels on the pitch and with those around him.

This is why the last couple of months have gone so relentlessly downhill; he appears to be in a mire of self-doubt that only deepens with each game, each dropping from the starting XI.

But football has always been a game of rapid turnarounds – of moments that can ignite resurgences in the long term – and a dominating display against the Championship side may just help Mkhitaryan to navigate around the corner.

If he draws another blank, you really struggle to imagine how he fits in during the business end of the campaign.