Potential XI: How Manchester United could line up with Lucas Moura

Manchester United are interested in securing the services of Paris Saint Germain forward Lucas Moura, with reports in France claiming an agreement with the player has already been reached.

Jose Mourinho called on the club’s hierarchy over December to rival Manchester City’s ambitiousness in the transfer market after failing to secure the services of Ivan Perisic over the summer.

And Moura, who has endured a difficult past 12 months in Paris, could provide some added stimulus in the final third ahead of further investment over the summer.

Here’s how Mourinho’s men could line up with the 25-year-old in the side. 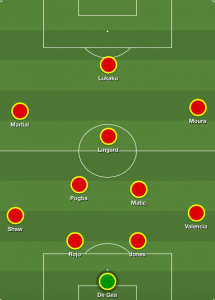 The Man United boss has responded to a galling 0-0 draw with Southampton by giving his attacking players, along with Paul Pogba, greater freedom to roam the pitch in an attempt to make his side less predicable in attack – a formula that worked wonders during the 2-0 win at Goodison Park.

And Moura, a naturally free-flowing footballer, would supplement this mould nicely. He has never been a player who thrives in a fixed position and benefits from having license to drop deep, pick up the ball, and take players on.

Combined with the nimble threat of Jesse Lingard and the cut-throat presence of Anthony Martial, Moura may indeed be the right player to encourage a more fluid, intuitive attacking approach during the second half of the campaign.