Antonio Valencia looks set for a return to action on Monday night against Stoke City after recovering from a hamstring injury sustained during the 2-1 win over West Bromwich Albion last month.

The Ecuadorian has returned to full training with the first team squad during their warm-weather camp in Dubai this week.

His absence was felt during lacklustre attacking displays against Leicester City, Burnley and Southampton, and Jose Mourinho will want to add his ruthless influence on the right hand side against a potentially resurgent Stoke side that parted way with manager Mark Hughes earlier this month.

With that in mind, here is a potential XI for the clash with the Potters including Man United’s captain back in the side. 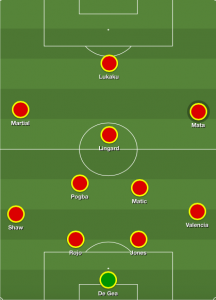 The dilapidating effect of Valencia’s absence on United’s set-up is always clear and forces them to play in a less direct, more patient manner, and while this produced an impressive display at Goodison Park you sense Mourinho will want to combine it with the 32-year-old’s cut and thrust on Monday.

And key to that will be the presence of Juan Mata, who has performed well in recent weeks, further up the pitch, skilfully manipulating the ball and drawing opponents infield to make space for Valencia to bomb down the touchline and provide width.

This is a combination that has worked to devastating effect in the past and it could be crucial to unlocking Stoke’s defensive frontier.