Eric Bailly has been videoed running in the pool by teammate Ander Herrera as he steps up his recovery from ankle surgery last month.

The defender, whose last appearance came at Stamford Bridge in early November, suffered ankle damage whilst on international duty.

Medical staff initially tried ‘conservative’ treatment to bring Bailly back sooner but he eventually had to go under the knife in December, with Mourinho noting he would be out for two to three months.

But Herrera’s Instagram story, which shows the pair sharing a joke as Bailly runs in the pool, shows that the 23-year-old is already on the comeback trail. 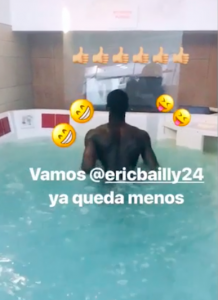 Mourinho has hailed Bailly’s capacity to bring himself back to match-fitness earlier than expected in the past and he will hope to see him do so again over the next month.

He is reluctant to let Axel Tuanzebe leave on loan at the end of January amid fears of a dearth in options at the back, but his refusal to rule it out completely suggests that he believes Bailly could return to action for as early as Man United’s clash with Huddersfield on February 3.

United have been caught out at set pieces too often over the last month and supporters will hope to see a return of the Ivorian’s bludgeoning influence at the back sooner rather than later.