Home » Potential XI: How Manchester United could line up with Alexis Sanchez

Potential XI: How Manchester United could line up with Alexis Sanchez

Manchester United are on the verge of completing the biggest scoop in the January transfer window, beating Manchester City to the signing of Alexis Sanchez.

Negotiations are ongoing with Arsenal as Henrikh Mkhitaryan and Mino Raiola work for the best deal possible, but you sense it is only a matter of time before Arsenal’s biggest goal-threat becomes Man United’s No.7.

But how exactly will Jose Mourinho, who described Sanchez as a “phenomenal” player last week, want to use him? Here is a potential XI. 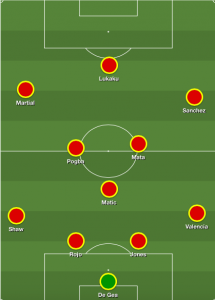 Man United have benefitted enormously from moving to a more fluid 4-3-3 system since the turn of the year, with Paul Pogba and Juan Mata driving play forward from the middle and bringing others into the game.

While the Frenchman dominates the game and Romelu Lukaku, combined with either Anthony Martial or Marcus Rashford, provides the cutting edge in front of goal, the crucial symbiotic relationship between Mata and Jesse Lingard often goes unnoticed.

One caresses the ball, draws players in, and subtly plugs gaps; the other takes advantage of these gaps created and bombs forward – a formula that has proven crucial in recent weeks.

And Sanchez now has the opportunity to play that latter role, bringing sharpness and execution to the final third whilst – crucially – sharing the load with Lingard, who has featured on an almost constant basis over the last month.