Home » Tottenham Hotspur vs Manchester United: Potential XI with Alexis Sanchez at No.10

Tottenham Hotspur vs Manchester United: Potential XI with Alexis Sanchez at No.10

Alexis Sanchez’s begun his Manchester United career in emphatic fashion against Yeovil Town with a couple of assists and a ‘Man of the Match’ performance.

The club’s new No.7 was deployed out on the left hand side in a 4-3-3 set-up and caused problems with his roaming presence on the ball, often drifting inside to link up with Marcus Rashford and Juan Mata.

But the procession at Huish Park ought to be taken with a pinch of salt; Sanchez will be properly judged for the first time at Wembley instead when Man United take on Tottenham Hotspur.

And with that in mind, here is how Jose Mourinho could line up against Mauricio Pochettino’s men on Wednesday night. 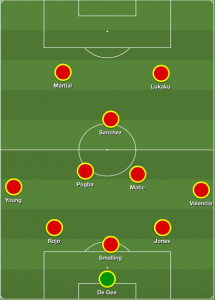 The 55-year-old has effectively used three at the back against teams employing a high press already this season – most notably against Watford and Arsenal – and you sense he’ll adopt a similar plan in order to stop Spurs from finding forward momentum.

And then we have the sheer potential of that front three. Mourinho signed Sanchez this month for a number of seasons and one of them, you sense, has this type of approach in mind: a ruthless counter-attacking trio with the 29-year-old as its conduit, exploding from the edge of his box to the opponent’s final third in a matter of seconds.

Mourinho has a serious counter-attacking weapon at his disposal in Sanchez and the hallow turf of Wembley would be the perfect place to demonstrate that very notion to the rest of the division.