It seems to have slipped the attention of many that Nemanja Matic has been nursing an injury for some time and desperately needs a rest to properly recover.

The Serbian has been carrying a knock since last month and a fresh injury to Marouane Fellaini against Tottenham Hotspur has only increased his workload.

This makes the role of Scott McTominay, who impressed against Huddersfield Town, all the more important as Jose Mourinho tries to delicately balance his limited midfield options.

With that in mind, here is a potential XI for Sunday’s visit to Newcastle United with Paul Pogba and McTominay. 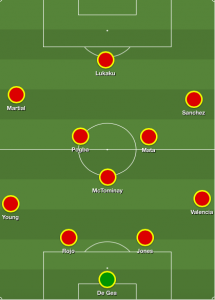 McTominay and Matic assuredly controlled the midfield battle against Huddersfield but Mourinho will know that something more will be needed at St James’ Park.

Bringing ‘The Kid’ to the base of midfield and close to Juan Mata will encourage quicker, more fluid ball circulation, giving Pogba the chance to exploit space further up the pitch and link up with Alexis Sanchez – a dynamic that could, given the pair’s shared desire to take centre stage, make for something quite special.

Mourinho’s life would be a lot easier if McTominay could be counted on the feature in these games and he deserves another chance to impress after a measured display against Huddersfield Town.