The worst thing Jose Mourinho could do against Huddersfield Town on Saturday would be to employ the same formation that saw his Manchester United side fall short against Newcastle United last weekend.

The 55-year-old has been met with a wall of criticism for using a 4-2-3-1 set-up at St James’ Park that starved Paul Pogba of freedom going forward and left Nemanja Matic – who needs a rest – painfully exposed.

And with that in mind, here is a potential XI for the meeting with David Wagner’s side featuring Marcus Rashford and Anthony Martial up front. 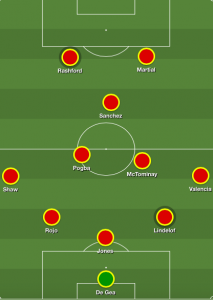 Man United were overrun by an ebullient Huddersfield side back in October using – yes, you guessed it – a 4-2-3-1 system and with critics lining up to lambast Mourinho’s men this week, a complete change of tack may be just what’s needed.

Using a back three, with Ashley Young and Antonio Valencia further up the pitch, would give United a shape conducive to dominating possession and retaining a solid shape, whilst giving Alexis Sanchez the chance to spring forward and link up with a strike partnership full of cutthroat speed.

And with a vital trip to Sevilla just a few days later, Mourinho ought to give the likes of Romelu Lukaku, Matic, Ashley Young and Jesse Lingard a chance to rest.