Romelu Lukaku once again drew a blank in a big game during Manchester United’s 0-0 draw with Sevilla.

The Belgian was largely isolated at No.9 throughout the game but missed a golden chance after 24 minutes, slashing over the bar following Alexis Sanchez’s ball into the box.

And with a must win game against Chelsea coming up, perhaps the best way to address Lukaku’s inertia in big games would be to leave him out altogether and force him to watch from the sidelines.

With that in mind, here is a potential XI for the meeting with Antonio Conte’s men featuring Marcus Rashford up front. 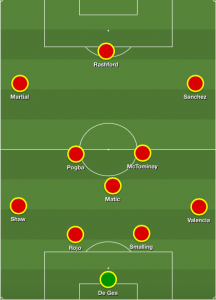 Benching Lukaku would almost merit the same uproar as Mourinho’s decision to leave out Paul Pogba against Sevilla, but it would make far more sense.

For whatever reason, Lukaku doesn’t look like the same player when the heat is on. Perhaps the Belgian, just six months into his Old Trafford career, still feels weighed down by the badge on his chest. Against teams like Huddersfield Town he is unstoppable; against the top six, however, he looks like he doesn’t truly believe he deserves to be there, leading the line in a heavyweight game.

And with the goals drying up in recent times, United need an injection of something different. And Rashford, who tormented Chelsea with his raw speed in behind last season, may just provide exactly that at a time when Mourinho’s attack is struggling to click.