Home » Manchester United vs Chelsea: Potential XI with Alexis Sanchez at No.10

Manchester United vs Chelsea: Potential XI with Alexis Sanchez at No.10

Chelsea produced a near perfect defensive performance against Barcelona on Tuesday night but you can be sure of Antonio Conte adopting a different approach at Old Trafford on Sunday.

For all the pressure on Jose Mourinho and Manchester United at this moment in time, the onus is on the champions to haul themselves out of fourth place.

In other words, Conte’s side will have to take the game to the hosts, and Mourinho – who brilliantly shut them down at Old Trafford back in April – will need to set up in a way that closes them out and provides a springboard from which to hit them on the counter.

With that in mind, here is a potential XI for the game against Chelsea with Alexis Sanchez at No.10. 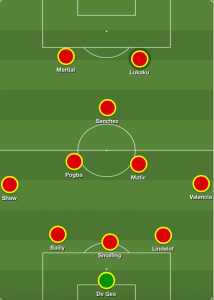 Bypassing Chelsea’s midfield – namely N’Golo Kante and Cesc Fabregas – will be crucial for Man United on Sunday. Alexis couldn’t find good positions out wide against Sevilla, often too deep and without support, and moving him to a more central role could give the attack more balance.

Wing backs Antonio Valencia and Luke Shaw will play an important part in giving Sanchez the opportunity to spring forward to supplement Anthony Martial and Romelu Lukaku up front, keeping Chelsea’s wide men on the back foot with a high tempo and waiting for a mistake, a chance to pounce.

When his happens, Mourinho will no doubt expect a quick, incisive pass through the lines to one of the attacking triumvirate, giving United an element of sharpness going forward that has been desperately missing in recent times.