Romelu Lukaku has earned a place in Garth Crooks’ BBC ‘Team of the Week’ following a superb performance during Manchester United’s 2-1 win over Chelsea on Sunday.

The Belgian endured a shaky start to the game but changed the mood around Old Trafford with a composed finish in a densely populated box to draw Man United level before half time.

He continued to harass Chelsea’s back three in the second half, producing a superb burst of pace and skill on the right hand side to bypass Antonio Rudiger and Pedro before crossing for Jesse Lingard to score the winner.

And the 24-year-old, now with 22 goals to his name this season, has been handed a place up front in Crooks’ ‘Team of the Week’, which amazingly contains four Liverpool players for beating David Moyes’ West Ham United at home. 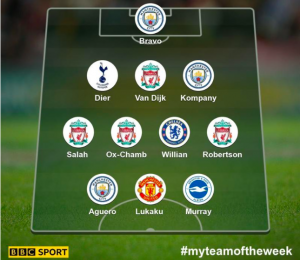 Lukaku’s tentative opening 30 minutes and ruthless final hour nicely epitomised Man United’s overall performance against the champions, but neither his goal or assist reflected the nature of his display as much as his driving, ferocious, explosive run through the middle of Chelsea’s defence with 93 minutes on the clock.

On an afternoon that saw the hosts give everything, this was a moment that Old Trafford appreciated the most: their main striker, having charged around all game, still surging forward in search for more.

It was, above anything, a classic United performance mixed with a Mourinho masterclass – ruthless efficiency, undying spirit, a desire to spring forward quickly, and, most importantly, three points.