With the final whistle at Old Trafford just seconds away on Sunday, Willian was allowed the space to bring the ball forward and earned a corner.

The hush around Old Trafford was palpable: a mixture of fear at the prospect of a last second sucker-punch and the dizzying feeling of victory being just one solid defensive header away.

And one player acutely aware of this was none other than Victor Lindelof, making just his second Premier League start of this calendar year.

While the cameras didn’t capture it perfectly, you could see from my vantage point from behind the goal that the Swede was bellowing at his teammates, clapping enthusiastically, imploring them to muster one last piece of resolve. 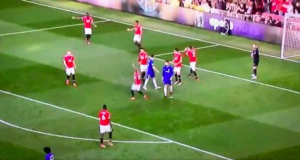 Once the final whistle blew and Old Trafford erupted, Lindelof, fists clenched, let out a celebratory roar that looked genuinely cathartic, as if he could finally breathe after 90 minutes of brutally wrestling a shark to death.

More notable, however, was his attitude – his aura – during those dying moments. The Lindelof we have known so far this season has been tentative, lukewarm, still learning the basics of the English game bit by bit – more of an apprentice than a key member. He even looks like a trainee to a certain extent, his glare placid and unassuming.

But against Chelsea we saw something new from the 24-year-old: an air of authority, of militant organisation, of a will to do whatever it took to win.

It was a far cry from the quivering display we saw in Macedonia back in August. Lindelof defended superbly throughout, moving the ball forward with confidence and, aside from one moment in the second half, positioning himself in a way that shielded the ball and prevented Chelsea players from exploiting avenues down the middle.

He ensured that substitute Olivier Giroud could never settle, nipping in front of him as well as dropping back at the right moment, picking his punches in a calculated, measured manner.

Against Newcastle United earlier this month, Phil Jones and Chris Smalling set the precedent for a turgid performance by moving the ball around with all the shakiness and uncertainty of someone fishing something out of a toaster with a fork.

Lindelof, on the other hand, demonstrated on Sunday through his passing through the lines and long balls that Mourinho’s men would not be bullied, that they were in control.

The win over Chelsea provided an important glimpse into a future containing something different for United: Romelu Lukaku bossed a big game, Alexis Sanchez played on the right and filled in as a covering fourth midfielder, and the midfield trio looked balanced for once. After weeks of inertia and the same questions being asked, United produced a response, or at least something refreshingly different.

And Lindelof, through his fluid passing and emerging confidence in a red shirt, could indeed become central to the renewed shape and feel of this United side over the next couple of months.