Manchester United claimed a huge win over Crystal Palace on Monday night but it will mean nothing if they concede the initiative – along with second place in the table – to Liverpool this weekend.

Much has been made of how Jose Mourinho‘s men will cope with the attacking threat of Sadio Mane, Roberto Firmino and Mohamed Salah, who has claimed a ridiculous 32 goals already this season.

And perhaps the best way to destabilise Liverpool’s attacking frontier is to launch an assault on Jurgen Klopp’s worst area: his defence.

With that in mind, here is a potential XI for the clash with Liverpool featuring Alexis Sanchez starting up front. 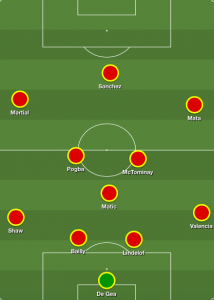 Leaving out Romelu Lukaku is a questionable move given the Belgian’s record of eight goals in his last 11 games, but there is a strong case for pitting the Chilean’s piercing speed against Dejan Lovren and Virgil van Dijk.

Mauricio Pochettino put Harry Kane and Heung-min Son right up against Liverpool’s back four at Wembley back in October, with Dele Alli just in behind, and the visitors were left scrambling in a 4-1 defeat, unable to break out from the back and, crucially, deprived of their usual route to the front three. If you can destabilise the base, you can destabilise the whole team.

And while United don’t have the same raw speed as Spurs, they do have the capacity to produce rapid interplay – as seen in equalisers against both Chelsea and Palace – that could unnerve Liverpool’s shaky defence.

With this in mind, Sanchez, who has struggled to find good attacking positions so far in his United career, fits the bill to start up front better than Lukaku. His superb close control and power in behind, combined with the likes of Paul Pogba, Anthony Martial and Juan Mata threading intricate passes, may well leave Liverpool scrambling.