Home » Manchester United vs Liverpool: Potential XI with Alexis Sanchez on the right

Manchester United vs Liverpool: Potential XI with Alexis Sanchez on the right

Alexis Sanchez has not, like many have claimed, played poorly since joining Manchester United, but he has hardly excelled either.

The idea shoehorning him into the left hand side – despite Anthony Martial and Marcus Rashford performing well in that role – came under further question during the first half of Man United’s 3-2 win over Crystal Palace.

Sanchez kept dropping back far too deep to receive the ball, dragging him further away from the final third and, worse, filling the same space Paul Pogba relishes in exploiting.

With that in mind, here is a potential XI for the clash with Liverpool on Saturday as Sanchez moves back to the right hand side. 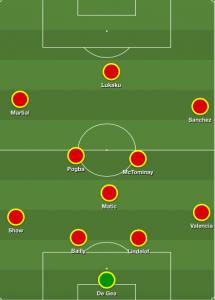 Pogba and Sanchez working closely together in precise attacking tandem sounds good in theory but fails to materialise in practice, mainly because both players naturally want to dominate specific areas of the pitch for themselves. Putting them in the same area is like putting a minus with a minus. It just doesn’t work.

Moving Sanchez over to the right hand side, therefore, makes sense when it comes to liberating Paul Pogba on the left but could serve a similar function to what we saw against Chelsea, where Sanchez stepped into midfield on occasion to snuff out possession.

Against a Liverpool side which will look to get the ball out to their front three quickly, the Chilean’s terrier-like influence looks likely to be crucial in slowing them down and putting extra pressure on the likes of Jordan Henderson and Georginio Wijnaldum.