Alexis Sanchez has hit back at reports claiming he eats alone in the Manchester United canteen with a photo of him enjoying a meal with Chile teammates on international duty.

The Chilean has only managed one goal in ten games at Man United and admitted on Wednesday that he expected more of himself during the early stages of his Old Trafford career.

And the Mail has reported that Sanchez’s woes are manifest off the pitch as well, with the 29-year-old apparently cutting a gloomy demeanour and eating by himself at the canteen.

In response, Sanchez posted a photo of himself having a meal alongside teammates in what seems like a middle finger to a paper that has often misrepresented him during his time in England. 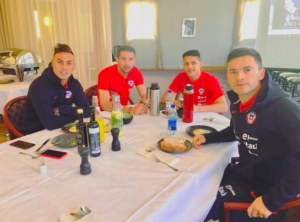 The forward also noted in a recent interview that he has a coffee with Zlatan Ibrahimovic – who will leave the club imminently, according to the BBC – every single day.

It is no secret that Sanchez is taking some time to adapt to life at Old Trafford. Speaking in Sweden on Wednesday, he opened up about the difficulties of switching clubs in January – something he has never done before – but this attempt by the Mail to depict him as some isolated, sombre figure full of misery and doubt over his Old Trafford move is nothing short of laughable.

An outsider would think he has gone through a major fallout with his manager, or perhaps even a fully fledged existential crisis. The reality is that he is simply taking time to adjust. Nothing more, nothing less.