Zlatan Ibrahimovic took up an entire page in the LA Times to announce his move to LA Galaxy from Manchester United.

The Swede has endured a difficult second campaign with Man United, managing just two starts due to persistent problems with his knee.

It was announced by the club on Thursday that Zlatan, who hadn’t started since Boxing Day, would leave the club with immediate effect.

And the 36-year-old has announced his move to California in classic fashion, taking up a whole page in the regional paper and leaving a simple message: “Dear Los Angeles, you’re welcome.” 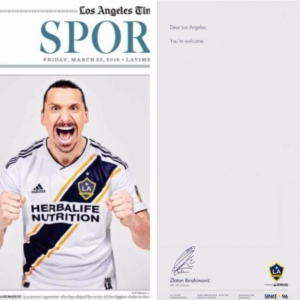 You’re welcome indeed, Los Angeles. There isn’t another place in the world with the same obsession with audacity, with big egos, with super-sized achievements – a place swirling with money and fame and image and success – as the City of Angels and, as of today, a lion nobody will be able to ignore.

Zlatan will be right at home. In an interview with the paper on Thursday, Ibrahimovic, when asked whether LA was big enough to handle his personality, replied: “If it’s not, I’ll make it bigger.”

He forced the world to take notice of his performances during his debut campaign at Old Trafford, plundering 28 goals, and nobody will bet against him doing the same here.