Manchester United went into the international break with a nasty taste in their mouth following defeat to Sevilla and Jose Mourinho‘s subsequent array of media outbursts.

To suggest that their season is unravelling would be an exaggeration, but Man United are at risk of letting the final two months of the campaign turn toxic.

But they have a chance to put smiles on the faces of supporters on Saturday against a Swansea City side without an away win since December 30.

Here is a potential XI for the clash with the Welsh side including both Paul Pogba and Alexis Sanchez. 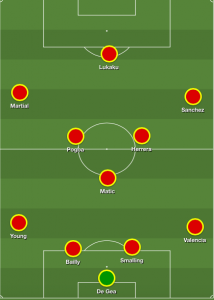 Injury to Scott McTominay and Marouane Fellaini‘s continued problems with his knee gives Pogba, who has only started four of United’s last 11 games, a chance to reassert himself on Mourinho’s lineup.

The Frenchman has struggled for form in recent times but has the potential to lift spirits through expressing himself on the pitch. That ebullience going forward at the Liberty Stadium back in August, with Pogba scoring and assisting a goal in a late onslaught, has been painfully missed over the last month or so.

Sanchez will likewise feel like he has a point to prove. He admitted last week to being disappointed with his performances at Old Trafford so far, and supporters will hope to see him come back from some time with his Chile teammates bringing his characteristic cutthroat vigour in the final third.