David de Gea and Jesse Lingard have both been handed a place in Garth Crooks’ BBC ‘Team of the Week’ after impressing during Manchester United’s 2-0 win over Swansea City last Saturday.

The Spaniard made two stunning saves from Tammy Abraham in the second half and claimed his 16th clean sheet of the season in the process – the most he has ever managed in a Premier League campaign.

Lingard’s excellent form at No.10 continued with an incisive, ebullient display as the Englishman supplied an assist for Alexis Sanchez after 20 minutes.

And the pair have been deservedly placed in Crooks’ BBC ‘Team of the Week’ as a result. 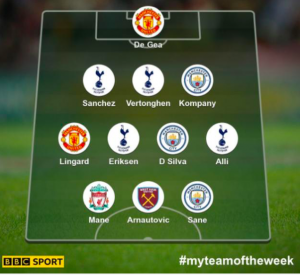 De Gea’s had to deal with a lot more during the first two years of the post-Fergie era, continually hauling his below-par side out of sticky situations, but only now is he truly receiving the recognition he deserves.

He has been nothing short of impeccable; with seven games left, the 27-year-old has claimed enough clean sheets to win the ‘Golden Glove’ award in the past five campaigns.

And Lingard, bit by bit, has asserted himself as an indispensable member of Mourinho’s starting XI with a string of nimble, dangerous displays that, in crucial contrast to last season, have also seen final product.

Nobody can deny that Lingard has relentlessly improved his game over the last 12 months.