Samuel Umtiti responded to continued speculation about his future at the Nou Camp by pointing to his club’s crest as he celebrated Barcelona’s second goal of their 4-1 win over Roma on Wednesday night.

The Frenchman has a release clause of just £54m and Manchester United have reportedly expressed interest in his services amid the club’s refusal to meet his wage demands.

He made it clear over the weekend that he was committed to spending his future at the Nou Camp but disputes over a new deal are showing no signs of being resolved.

Having forged a Costas Manolas own goal from an Ivan Rakitic cross in the first half, Umtiti made a point of pointing to the badge as he wheeled away in celebration. 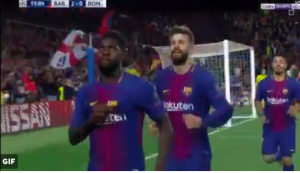 Speaking after the game, Umtiti remarked that his celebration was a deliberate signal of love for the club.

“It’s a celebration like any other, I just wanted to say how much I love this club,” he said.

“I just play, try to do things right. This is the most important thing for me. I try to do it for a club like Barca, and continue to do it.

“As for everything else, these are things that come out in the press. Some are true, others wrong, but I just focus on football.”

Nobody could deny that Umtiti adores playing for Barcelona and wants to stay for many years to come. And interest from United, like with Sergio Ramos in 2015, seems more like a means of gaining leverage in negotiations for a new deal.