The feel good factor is back at Manchester United following a remarkable 3-2 win at the Ethiad last weekend.

And Jose Mourinho‘s men can keep supporters on a high ahead of an FA Cup semi-final with Tottenham Hotspur by closing to just one win away from guaranteeing Champions League football next season by beating bottom club West Bromwich Albion.

The clash on Sunday provides the perfect opportunity for Anthony Martial to reassert himself on the starting XI amid fresh rumours pointing towards a potential summer exit for the Frenchman.

With that in mind, here is a potential XI for the clash with the Baggies featuring Martial on the left hand side of a three man attacking midfield. 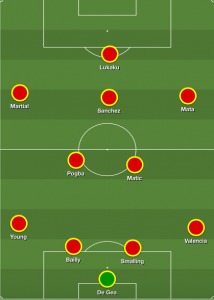 Mourinho is likely revert to the 4-2-3-1 that saw United dismantle Swansea City on Sunday, moving the ball quickly to the attacking three in an attempt to put pressure on the visitors and get Romelu Lukaku on the ball.

West Brom will, no doubt, look to sit back and absorb pressure, but their need for points will no doubt mean they leave gaps in behind. And Martial has the chance to make a case for further opportunities in the starting XI with a slick, positive minded performance going forward. He will be hungry to impress following a week of new speculation about his predicament at Old Trafford.