Manchester United came back down to earth with an almighty thud against West Bromwich Albion on Sunday with a turgid, ineffective display that saw them suffer a 1-0 defeat.

The attack looked stultified, without clear purpose, and ultimately started to cave in on itself towards the end as Jose Mourinho went in search of an equaliser which was never going to come.

He would be smart to give several key names a rest ahead of Saturday’s FA Cup semi-final with Tottenham Hotspur and refresh his attacking lineup against AFC Bournemouth on Wednesday.

With that in mind, here is a potential XI for the meeting with Eddie Howe’s men. 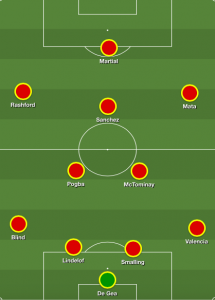 There has been a growing sense of unrest among supporters and pundits regarding the role of both Marcus Rashford and Anthony Martial in this United side in recent weeks. They have made just three Premier League starts put together since the arrival of Alexis Sanchez in January; supporters have demanded they – especially Martial – receive more playing time than that.

And with Mourinho likely to rest the likes of Romelu Lukaku, Jesse Lingard, Nemanja Matic, Ashley Young and Eric Bailly ahead of the semi-final, the pair have a chance to join the attack from the start and add some much needed energy to the side’s forward line following what was one of the worst attacking displays of the year on Sunday.